Allow me to introduce myself.  My name is Steve Pribish and this is my initial blog post.  I am a self-published writer of historical fiction dealing with the Russian-American experience from 1905 to 1931.

What I hope to accomplish through this blog is to present my Eastern European family's experience after immigrating to the United States and how their lives became the basis for three novels. My fictionalized stories are based on real people, though all the events may not have happened to the particular character.  Through my blog I plan to pass on lessons I learned about writing, publishing and selling your stories: i.e., dumb mistakes, brilliant ideas, and all the stuff in between. (Mostly dumb mistakes.)

Here  is my bio as seen on my book:


Steve Pribish was born in Joliet, Illinois of Russian immigrants and learned stories of "years ago" first hand from his father and grandfather. After college, Steve spent thirty-three years working for the United States government monitoring the Soviet Union. He was deeply involved in Russian culture and made prolonged trips into European Russia. His first two novels, Ikons and Banners are the result of several generations of experience. Steve is the author of over two hundred government reports and has written for Home and Away and Videomaker magazines, and several Midwestern newspapers. His short stories, There Will Be Crosses and The MiG and I both won regional first place awards.

There is more to my life than that, but for the time being, it will do.

The Genesis of the Novel

One of the first things an immigrant to America did upon achieving a modicum of success was pose for a portrait.  Whether one man or an extended family, the results presided in their home’s place of honor surrounded by pictures of saints and the current president.  Alas, as families became Americanized, they regulated their portraits to a more obscure spot and replaced it with an art work whose colors matched the sofa. 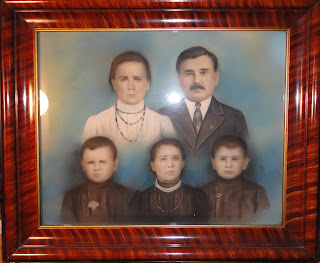 I remember being introduced to my family’s portrait when it hung on the basement storeroom wall of our home in Rockdale, Illinois.  Following my father's death, I was entrusted with the treasure and promptly placed it in an out of the way spot in my basement work area.  Several years later, when the reproaching eyes of my bygone relatives finally bore deep enough into my soul, I started to dig into the history of the artifact.

Its story was haunting.  Distant relatives recalled something about it saving my father’s life and others related the mystery of how all the people were together when they had never assembled as a group.  Sadly, the principles had passed away taking with them any direct connections to the portrait’s origin.

As I learned more, I attempted to assemble known facts into a short story called The Portrait.  However, the deeper I dug into the family tree the more tangled the roots became.  I was facing a saga of epic proportions.  The Portrait had morphed into a novel.

A very rough story outline resulted in a novel spanning over 700 pages. In 1989 I began my daunting task typing away on a 1980’s state-of-the-art Texas Instrument TI-99A word processor with an ever so slow dot matrix printer.  I christened my novel Ikons and divided it into three books.  Each book was titled after an icon used by the orthodox religion.
Book One: Saint Nicholas the Wonder Worker was set in the period from 1905 to 1914.  The title came from icon carried by Russian immigrants on their journeys.
Book Two: Christ With the Fiery Eyes covered World War One to the Bolshevik Revolution.  Its title reflected the icon carried by front-line Tsarist soldiers.
Book Three: She Who Nourishes spanned the revolution to final chapter in 1931.  Its title referred to the icon of the Blessed Mother bestowing God’s blessing on children.

In the end the one novel became three: Ikons: Saint Nicholas the Wonder Worker, Banners: For God, Tsar and Russia, and Slogans: Our Children, Our Future.

An historical-fiction novel needs three elements:  exotic locations, gripping characters, and a significant historical era.  I may be biased in believing my locations and characters qualify, but there is no denying my chosen era has historic events in spades.  From 1900 to 1930, the world experienced world war, revolution, competing economic systems, mass immigration and migration, xenophobia, and financial and social upheavals. The scope of these three decades was so vast, I scaled it down by putting a human face to all these events by placing my characters either history's forefront or the wake.
Posted by Ikonreader at 12:00 PM No comments: